Yes to Immigration Reform — No to ‘Enforcement First’ 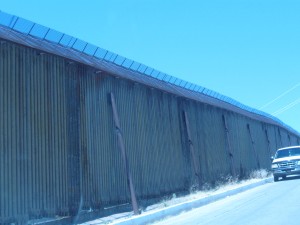 Last week, the fight for immigration reform kicked off in earnest. Plans from both Senate leaders and President Obama were unveiled.

After more than 25 years of intense advocacy, we have never been closer to immigration reform than we are right now. The high turnout of Latino voters in the last election has suddenly prioritized the issue with politicians from both major parties.

Such reform must start with bringing 11 million undocumented people out of the shadows of exploitation and persecution by providing a path to integration and full citizenship. The excitement of being closer than ever to achieving this American dream for so many is palpable and growing.

However, this excitement is also mixed with worry and doubt. Many communities, including those in our border region, have every reason to fear that an immigration reform that comes out of Capitol Hill might not be as good as expected and that it will be marred by an “enforcement first” mentality once again.

We can see the evidence of “enforcement first” all around our border community. An unprecedented amount of unaccountable immigration enforcement has been implemented in the last 20 years to seal the border and crack down on undocumented immigrants. Nativist politicians in the Republican Party have treated these policies as a prerequisite for any reform that would legalize the undocumented.

So we have seen more than 400 miles of fencing and walls erected on our southern border, and Customs and Border Protection personnel expanded to over 22,000 agents in the last 10 years. This expansion makes it the largest enforcement institution in the nation, and yet we do not have immigration reform.

If lawmakers continue on this path of “enforcement first,” our communities are concerned that immigration reform will only increase harsh penalties for immigration violations, separate families, discriminate against women, continue the militarization of the border and further criminalize individuals.

In other words, trading off the rights and dignity of human beings for political gain.

This would be reprehensible and would violate our core American values of justice and equality. But, unfortunately, these things are currently part of the debate.

This is the question central to the upcoming national debate: When will it be enough?

Even though President Obama has embraced the idea of reforming our ill-conceived immigration system, his administration has presided over the expansion of the most aggressive and punitive policies against immigrant families in U.S. history.

In the last four years, the U.S. has broken every record for deportations ever set. This administration expanded the controversial “Secure Communities” deportation program to every county in the U.S., often over the objections of local communities and law enforcement.

Immigration-enforcement strategies under Obama are also costing taxpayers dearly. A report released by the nonpartisan Migration Policy Institute detailed how the federal government spent $18 billion on immigration enforcement in 2012 alone. This dwarfs the budget of all other federal law-enforcement agencies, including the FBI and CIA, combined.

So when will it be enough?

The Border Network for Human Rights, along with others across the county and along the southern and northern borders, is calling for an immigration reform that doesn’t include more of this costly, punitive and unaccountable enforcement. Instead, we seek to make enforcement systems accountable.

This also means that these enforcement systems must respect American principles of equality and dignity, civil and human rights, transparency and fiscal responsibility. We want the voices of those most affected, border residents, to be heard in the political debate over immigration.

Enough damage has been done in the name of “enforcement first.” We must move from “enforcement first” to human rights first, reject more punitive policies, and make enforcement accountability a major part of the coming immigration reform deal.

Fernando Garcia is the executive director of the Border Network for Human Rights.

This piece also appeared in the El Paso Times.