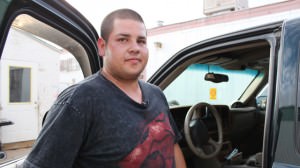 By now you have heard the amazing story of an Albuquerque man who chased after a child abductor and saved a 6-year-old girl’s life.

Antonio DÃ­az ChacÃ³n, 24, used his truck to chase the man who had snatched the young girl and fled with her in his van. He rescued the child when the kidnappers’ vehicle crashed.

Chacon’s story was captivated people around the country and there are at least two Facebook fan pages for the young hero.

But something was missing from the mainstream media’s reporting of this amazing story. Chacon is an undocumented immigrant.

Considering the the fact that New Mexico Gov. Susana Martinez has vowed to take away licenses from undocumented immigrants in the state, we have to wonder:

Will Gov. Susana Martinez take away this young father’s driver’s license next month?

UPDATE: After some prodding, Fox News Latino updated their story to include Chacon’s legal status. FNL is now the only English-language outlet reporting that fact. UnivisionNoticias.com was the first to report it.