The 3%: Gov. Martinez’s Claims About Driver’s License Fraud are Overblown 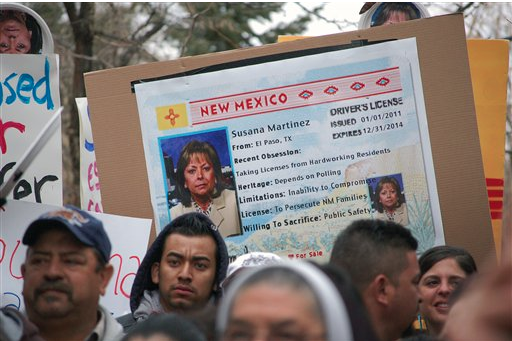 AP Investigation finds only a tiny minority of applicants are suspicious

A recent analysis of driverâ€™s license application abuse rates by the Associated Press sheds light on some facts and it raises questions about political speculations on both sides of the debate.

Perhaps most striking is the relatively low number of supposed abuses of the application process. After almost a decade of issuing licenses to drive to applicants who do not use a social security number only 170 addresses are suspect, representing 3% of all applicants. And even some of these suspect address are already resulting legitimate such as those housing units in our military installations.

Despite legitimate addresses, how does this rate compare to the abuse or fraud that other states experience with their driverâ€™s license application process? It is not clear that states who do not have a legitimate way for immigrants to apply for a license to drive have a lower rate of application abuse.

With such a limited number of suspect cases, how much sense does it make to legislate a blanket solution to an issue that cannot be zeroed in to one sector of the population? What is the state doing to target those cases where the abuse or mistakes are occurring? How much responsibility lies in utility companies who issue account statements, MVD employees who need to be better trained to process applications, or businesses who exploit immigrants and abuse New Mexican laws? Also, the AP does not report that suspect addresses are in Dona Ana County, the Governorâ€™s home county, or other Southern New Mexican communities.

Any legislation to repeal the 2003 law, would not only not fail to target specific places where abuse may occur, but it also would also impact the pocket book of all New Mexicans who use the roads. The public remembers that the reason this law was created was to improve safety, reduce uninsured rates, and balance insurance cost. Even more impacted would be the tens of thousands of drivers currently out of immigration status who work, raise their families, educate their children, and go to church utilizing their license to drive.

Voters will remember that no law enforcement officials complained that this was a problem until Susana Martinez began her campaign to be governor. It is an unfortunate but realistic observation that using the divisive issue of immigration will activate a passionate sector of the Republican Party. This Tea Party element has already been connected with xenophobic, nativists positions. During a similar debate in our neighboring state of Texas, the Tea Party leader said that the reason anti-immigrant laws were not more prevalent in the state is because there are â€˜too many Hispanic legislators.â€™

For the Governor and Republican and Democratic lawmakers to begin to adopt and institutionalize the vision that xenophobes value, it is a departure from the traditions and culture of New Mexico, where Spanish is Constitutionally also the official language, and where people recite their pledge â€œI salute the flag of the state of New Mexico and the zia symbol of perfect friendship among united cultures.â€

Instead, the public should focus on persuading their federal lawmakers to deal with immigration issues, because the Federal government is the only one with the Constitutional authority to make immigration laws. State lawmakers will realize that voters believe their time be better spent improving the budget of our state to create more jobs.