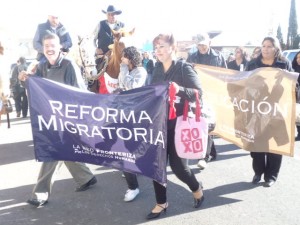 EL PASO, Texas – Immigrant advocates in Texas are marking International Human Rights Day today by decrying what they call “systematic violations” of international law and the U.S. Constitution. At a 1 p.m. rally at the border fence in El Paso, protestors will demand sweeping reforms of the immigration system.

“All of this has been the result of this almost ideological border enforcement – enforcement, enforcement and more enforcement. It has been very personal for many of us, because that could be one of our family members – our granddads, brothers and sisters – dying.”

Proposals for comprehensive immigration reform have been scuttled in recent years by those who say the border should be sealed first. However, the latest census data confirms that over the last five years, net migration from Mexico has fallen by almost 1 million, to zero. After Latino voters turned out in greater-than-expected numbers in the last election, many lawmakers are now signaling they are ready to rethink their anti-reform stance.

Garcia says most Hispanics seeking opportunity or family reunification prefer to do so by legal means, but a broken system has made that almost impossible. Contrary to political rhetoric, he adds, the nation’s 11 million undocumented immigrants are not asking to jump to the front of the citizenship line.

“We understand that there’s going to be provisional residency, then permanent residency, and then, in a few years, citizenship. We know that it’s going to take a while. And we know that, yep, we’re going to be sent to the back of the line. But, right now, the line doesn’t work.”

Besides a pathway to citizenship, he says reforms should steer resources toward administrative problems – like the growing backlog of residency applications – instead of toward building more border walls and militarized enforcement efforts. Meanwhile, he says, groups like his will continue to seek remedies for what they see as human rights violations through local, national, and international channels.

More information about the rally and the documentation of border-region human-rights abuses is available at www.bnhr.org. Further analysis of census data is available from the Pew Hispanic Center.