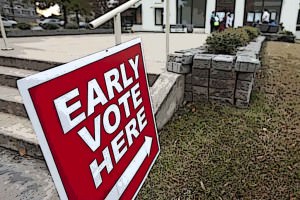 AUSTIN, Texas – Record or near-record turnouts are being reported in some of Texas’ largest counties for early voting, in advance of the Nov. 6 election.

This is the final week for early voting in Texas, and poll-watchers who are doing their part to ensure the process is fair say voting early is a good idea – especially if you think there might be problems finding your polling place or proving your identity. It means having a little bit of extra time to resolve those questions, most likely at a county election office.

Luis Figueroa, an attorney with the Mexican-American Legal Defense and Education Fund (MALDEF), one of the groups on “election protection” watch, says they’re already hearing some of the usual complaints, such as poll workers closing for lunch breaks.

“We have heard about election officials asking for identification that is not necessarily required under the current law. We have had some concerns about electronic voting machines.”

With all the controversy about voter ID laws in Texas, Figueroa says it’s important to remember that photo identification is not required – although it can come in handy if you have it. Poll workers are confirming three things: your identity, that they give you the correct ballot for your precinct in early voting, and that you’re voting in the right place on Election Day. Figueroa says redistricting has meant many polling sites have changed.

“They do use the identification to match you up to their statewide voter database list and to the list of names that they have, and make sure that you’re at the right place, and that you’re not on what’s called a ‘suspense list.’ ”

The “suspense list” includes names of voters for whom their county needs to update information, or those who are registered but haven’t voted for a long time. Figueroa says voters should bring the Voter Registration Certificate to the polling site with them.

If you haven’t received your certificate or you’re unsure of the status of your registration, he says, now is the time to contact the county election office.

Volunteers are working at a frantic pace to remind Texas’ almost 13 million registered voters to take the all-important step and use their right. At the Southwest Voter Education Project, vice president Lydia Camarillo says the process should intimidate no one.

“We like to look at the glass half-full, not half-empty. We’ve registered voters; we stopped the voter ID law from taking place. So now, right now, I’m just hoping that as we contact the voters, we share with them – especially those that are new voters – it really is a process that, once you understand it, is not that difficult.”

Camarillo sees every vote as, in her words, “a weapon to fight for what’s just.”