Some things are meant to be. Peanut butter and jelly. The tea party and racists. Out-of-state political contributions and Susana Martinez.

“They’re calling, e-mailing and faxing New Mexico lawmakers asking them to stand with the 77 percent of Americans that oppose licenses to illegal immigrants,” said William Gheen, director of ALIPAC.

It’s too bad for Gov. Susana “This isn’t about immigrants” Martinez and her tea party “We aren’t racists” supporters that this group has a well-documented history of anti-immigrant fear-mongering and extremist rhetoric.

From the Anti-Defamation League:

Gheenâ€™s rhetoric demonstrates an agenda that goes beyond the enforcement of immigration laws.Â  He regularly demonizes immigrants as drunk drivers, gang members, invaders, murderers, and disease-carriers. In a June 2008 rally, sponsored by ALIPAC in North Carolina, Gheen stated that â€œwe have illegal aliens that are drinking and driving, and vicious, very dangerous, gangs in this state that are killing people…â€

Gheen has gone so far as to refer to undocumented immigrants as Nazis. This particular comparison followed a December 2007 appearance on a FOX News: Fox & Friends segment in which he discussed the presence of undocumented immigrants in North Carolina community colleges. Gheen opposed offering in-state tuition to undocumented immigrants [Martinez also opposes similar DREAM Act measures for students – Ed.] and argued that they take seats away from American students by attending the community colleges. In a February 2008 post in the commentary below the YouTube video of the segment, an individual stated, â€œHey, this sort of sounds like the propaganda that Hitler used to stir up hatred and blame the Jews for all of the economic woes of Germanyâ€¦â€ In response, Gheen wrote, â€œYea, except this time Americans are the Jews and the illegal aliens and their supporters are the Nazis. …â€

Gheenâ€™s rhetoric was even more extreme at an August 2007 rally in North Carolina, where he stated, â€œIllegal aliens in this country have set up ethnic cleansing zones, ethnic cleansing zones where if you walk past the wrong sign post, the invisible line, youâ€™re under the threat of death.â€

Like the various New Mexico tea parties, ALIPAC has ties to the violent right-wing Minutemen militia. New Mexico tea partier and militia member Bob Wright emceed the tea party rally in support of Gov. Martinez on the first day of the session. And here is he is again at the White House lawn: 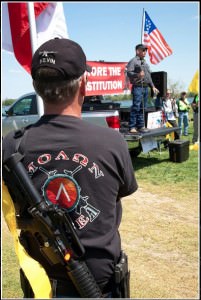 Gov. Susana Martinez has spoken out before about how she doesn’t like when out-of-state special interest groups get involved in New Mexico’s driver’s license business. See below:

Of course, the group she was referring to was the New Mexico office of MALDEF and the plaintiffs were lawmakers… in New Mexico… and a legal permanent resident… in New Mexico… who was targeted in her unconstitutional program.

Will Martinez stand up to this actual out-of-state interest group siccing their membership on New Mexico lawmakers?

We recommend that nobody hold their breath.

UPDATED: A note for the team at KRQE, the ADL also had this to say about ALIPAC:

“In spite of his statements demonizing undocumented immigrants, mainstream media around the nation continue to portray Gheen as a grass roots activist, failing to cite his ideology, activities, and affiliations.”