Senators Visiting the Border As They Work on Immigration Legislation 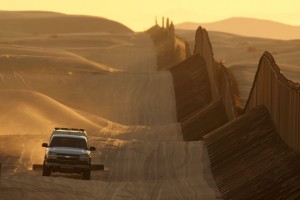 (EL PASO, Texas) –  On Wednesday, March 27, four senators working on immigration legislation will visit the U.S.-Mexico border to decide what needs to be done next.

“For years, it’s been too much, too fast,” said Fernando Garcia, BNHR Executive Director. “We don’t need more drones, walls or weapons here. What we do need is for the operations here to be infused with accountability and oversight, and for the ports of entry to finally get the resources that they are lacking.”

Immigration reform has been held hostage to arbitrary, often unrealistic, standards border security for too long. BNHR welcomes the senators to the border and demands that they take a closer look at what would really make our southern border more secure, more free and more prosperous.

In fact, our border communities have seen an unprecedented expansion of the efforts to “secure” the border in the last 10 years. We have increased the number of border patrol agents to more than 22,000. Hundreds of miles of fencings and wall have been erected. Military units and National Guard have been deployed in a constant and unregulated basis. And billions of dollars, $18 billion in 2012 alone, have been spent and wasted in programs, operations and technology.

BNHR strongly rejects the notion that more punitive, expensive and unaccountable enforcement is needed to move forward with a functional and humane reform that brings people out of the shadows and unifies families.

What BNHR has recommended to lawmakers is the establishment of a DHS Border Oversight Task Force to bring accountability to border enforcement programs, policies and strategies.  This Task Force would hold federal border enforcement agencies accountable and provide recommendations regarding border operations, complaint procedures, conditions in Border Patrol facilities and vehicles, DHS training programs, and federal border security and immigration policy.  Composed of diverse appointed stakeholders, from northern and southern border communities and experts on border issues, the Task Force would conduct independent investigations, evaluate, and submit reports, findings, and recommendations to the President, Congress, and relevant federal agencies on a semiannual basis.

A visit to the border will show the senators that communities here largely safe from crime, but are suffering the consequences of having the U.S. government’s largest law enforcement operation — border enforcement left to operate without accountability or oversight.

Lawmakers should concentrate their efforts and taxpayers’ resources to making border enforcement systems better.  A balanced approach to immigration enforcement would better reflect our American values of due process, fiscal responsibility and accountability.