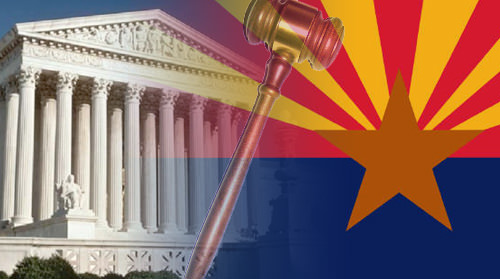 The Supreme Court issued its mixed decision today on SB 1070, Arizona’s notorious anti-immigrant law. BNHR, in conjunction with various social sectors in our region, held a press conference Monday to provide reaction and commentary on the decision and to announce a new strategy to end the spread of racial profiling laws like SB1070 in Texas and New Mexico.

In a divided decision, the Supreme Court allowed the “papers, please” provisions of SB 1070, Arizona’s hateful racial profiling law to go into effect. The issue before the court was one of federal preemption, not the obvious intent of the law to strike fear into immigrant families.

To be clear, this provision was presented to the Justices as a technical legal matter of federal preemption. This is a matter of legal theory. The Court did not rule on the tendency of the law to be discriminatory.

But everyone knows what “papers, please” is really all about – targeting one community for “elimination through attrition,” in the words of the laws’ proponents. It must be remembered that “papers, please” policies have their origin in a Germany that was set on doing to the same.

This provision has been roundly criticized by both law enforcement and constitutional law experts, many of whom stated that it would be impossible to implement them in a race-neutral manner.

“By issuing this decision, the Supreme Court has validated the anti-immigrant sentiments of ideologues,” said Fernando Garcia, BNHR Executive Director.  “The Court left standing the provision that is built completely on fear and anti-Latino sentiment.”

“It’s very unfortunate that the Court did not consider, and that the Obama Administration did not present this law in the context of racial profiling what is right for the U.S.,” said Garcia.  “This decision is on the wrong side of history.”

The Court correctly struck down wrongheaded policies that would have pushed families, workers, and senior citizens into the criminal justice system. But the Court made a grave error in upholding the discriminatory “show me your papers” provision that violates people’s basic rights. Those Justices are out of touch with what this law means in Arizona communities.

But this is not the final word on “show me your papers” laws. Anti-discrimination suits are pending, and BNHR calls on the U.S. Department of Justice to be vigilant in stepping up civil rights enforcement.