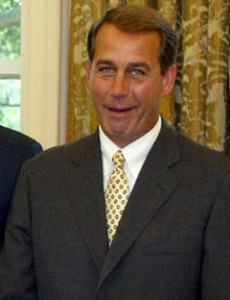 In case you missed it during the excitement of Barack Obama‘s visit to El Paso, Texas, on Tuesday, House Speaker John Boenher was telling lies about border communities in a desperate attempt to undermine the growing immigration reform movement.

Boehner said that Congress needs to focus on border security and decreasing border violence before turning to immigration policy reform.

Boehner seems to be ignorant of a few facts. First of all, the border hasn’t just been secured, it has been militarized on both sides. Obama sent National Guard troops to the border and deployed over 20,000 more Border Patrol agents. In Mexico, Federal Police are a permanent fixture at the U.S. border in Juarez.

Second, the border fence has been built over the concerns of law enforcement, businesses and residents on the border.

Finally, Boehner may have missed the memo that border cities, particularly El Paso, are consistently among the safest in the country. Many have speculated that immigrants themselves are responsible for the so-called “border miracle.”

Thankfully, Rep. Silvestre Reyes called Boehner out on his lies about our community and his ignorance of his own district, which is more violent than the major Texas border cities combined. Oops.

“Speaker Boehner should focus on controlling the level of violence in his own state before tarnishing the image of border communities that remain among the safest places to live in America.

As his office asserts that Congress cannot consider reforming our broken immigration system until border violence is under control, the fact remains that the six largest cities in Ohio all have higher rates of violence and crime than every major city along the U.S.-Mexico border. In fact, the Speaker’s own district in Dayton, Ohio saw more homicides in 2009 and 2010 than Texas’ four largest border cities combined, despite the fact that Dayton’s population of 141,500 is only about one-tenth of the size by comparison. [Emphasis added.]

According to the most recent City Crime Rankings Survey by CQ Press, Ohio’s cities have higher rates of violence and crime in every category, including murder, rape, robbery, aggravated assault, burglary, and motor vehicle theft than border communities.”

Mr. Speaker, we get that insulting border communities may score points with the far-right. But invoking the problem of border violence, which is real and mostly happening on the other side, just to score political points is creepy. We’re trying to feel sorry for you getting owned by Rep. Reyes, but we are too distracted by the imaginary bullets whizzing by our heads.