After more than 25 years of intense advocacy, we have never been closer to immigration reform than we are right now. The high turnout of Latino voters in the last election has suddenly prioritized the issue with politicians from both major parties. In fact, a bill is expected to be filed by the end of this week or next.

It’s time for a new enforcement strategy at the border that reflects our shared American values of accountability and oversight, respect for human and civil rights, and fiscal responsibility. 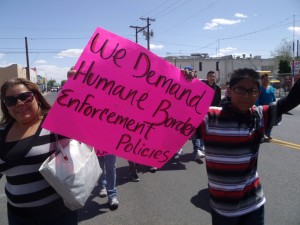 In 2007 politicians asked for 4 drones and 105 radar and camera towers to scan the border. Today, there are 10 drones at the border and 300 towers. There are also more than 650 miles of fencing and walls erected at our southern border, and Customs and Border Protection personnel expanded to over 22,000 agents in the last 10 years. This expansion makes it the largest enforcement institution in the United States, and yet we do not have immigration reform.

So far border residents, including local business owners, and law enforcement, have not been considered as partners in making the border region more secure. This must change. After years of work, Border Network for Human Rights has a model for how this new enforcement strategy would look.

Our vision for federal border policies is that they would create a safe, free, and prosperous region for those who live and work at the border. We believe that the way to achieve this by embracing an essential American value—accountability. The same oversight, transparency, and fiscal responsibility that we demand of other government systems must also apply to the U.S. government’s largest and most costly law enforcement system—the border and immigration enforcement system.

Over the years, Border Network has developed what we call the “El Paso Model” for border security. This model makes border residents partners in national and community security rather than the targets of it. The name comes from what the Border Network has been able to achieve in El Paso through working with people from a broad cross-section of border life.

For example, through building a relationship of understanding and respect between border communities and our local immigration enforcement agencies, specifically the El Paso Border Patrol sector, we have reduced the incidence and severity of mistreatment by federal agents in our region over the last 10 years. In fact, it was through this dialogue with the Border Patrol that the El Paso Sector became the only Border Patrol Sector to currently have a non-uniformed community liaison officer. This development represented an important victory for both human rights and security in the region, proving that these two priorities need not be in competition with each other.

The El Paso model of engagement and dialogue doesn’t just apply to federal agencies. The Border Network for Human Rights has replicated this same model with local police chiefs and sheriffs. Through years of work with local law enforcement in El Paso, their agencies changed their strategies of community policing to specifically prohibit officers from acting as immigration agents.

Taking all of this into consideration, it becomes clear why El Paso has repeatedly been named the safest U.S. city for its size. When enforcement agencies are accountable, community security and civil rights are both protected. This goal and the values of participation and accountability in enforcement strategies are at the heart of what Border Network is fighting for.

Once Congress finishes this year’s debate on immigration reform, we will enter a new phase of discussion and policy development on enforcement and criminalization. The question is whether or not enforcement will continue to operate without accountability, oversight, or input from those who are impacted by border policies. The lesson from El Paso is that the battle against unaccountable enforcement and criminalization can only be won by an organized community with a diverse group allies in business, faith, and law enforcement.

Border Network for Human Rights is a grantee of the Open Society Foundations. This piece first appeared in OSF Voices.