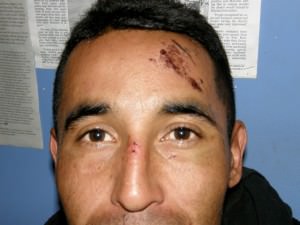 This man was beaten by Border Patrol while in custody.

A new report from Tucson, Ariz., organization No More Deaths (NMD) finds U.S. Border Patrol systematically deprives detainees of basic rights, medical care, and food and that such abuses represent a â€œculture of cruelty.â€Â  This culture is fostered by a lack of oversight and accountability for the agency, part of the largest federal law enforcement body in the United States.

No More Deaths and partner organizations interviewed nearly 13,000 people to compile the Culture of Cruelty report, which will be released September 21.Â  One interview included a 54-year-old man who had lived in Los Angeles for 35 years. Border Patrol detained him in October 2010, as he tried to return home after visiting his ailing mother in Mexico.Â  He suffered a back injury when the Border Patrol vehicle transporting him flipped over. After hospital treatment, he was deported and then died in Nogales, Sonora after his medication ran out.

Says Danielle Alvarado, a No More Deaths volunteer and co-author of the report: â€œWhat weâ€™ve found is clearly not the result of a few â€˜bad applesâ€™.Â  We continue to hear the same stories from thousands of people, released from different Border Patrol stations, year after year. They are alarmingly consistent.â€

According to the interviews, individuals suffering severe dehydration are routinely deprived of water; people with life-threatening medical conditions are denied treatment; children and adults are beaten during apprehensions and in custody; many are crammed into cells and subjected to extreme temperatures, deprived of sleep and subject to humiliation and other forms of psychological abuse. Alvarado suggests that many of the practices documented in the report constitute torture under international law.

Conditions in Border Patrol custody have not changed much since 2008, the volunteers say, when NMD published its first Border Patrol abuse report.

Says Alvarado: â€œAbsolutely no one is taking responsibility for the patterns of abuse that persist. We have filed dozens of complaints and not one has produced any change. This is just one more way the Obama administrationâ€™s flawed approach to enforcement has undermined his credibility with immigrant communities. It is an affront to our collective sense of justice, fairness, and equality.â€

The group urges an immediate end to abusive practices, report and transparent, independent, and accountable oversight of the U.S. Border Patrol â€“ including an overhaul of the complaint investigation process.

The Border Network for Human Rights Wednesday hosted the Texas release of the report. No Mas Muertes volunteers Cecile Lumer and Philip Kennedy presented the report and it’s findings. Lumer personally conducted thousands of interviews in preparation of the report.

Simultaneous press events are being held by community organizations in Tucson, Douglas, Seattle, Detroit and Boston.

The new report is available online at CultureOfCruelty.org.