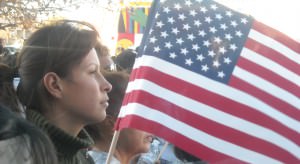 New data released this week is good news for those who want to move forward on citizenship for 11 million undocumented Americans. Latino voters reject the idea of waiting for politicians to declare that the border is secure before moving forward on reform.

Read more about the poll here.

The evidence is mounting that Americans are rejecting the idea of increased border enforcement as a requirement for immigration reform. Instead, Americans support common-sense solutions for immigration and the border.

And there are more reasons for some to move forward. The poll also shows that both major parties have a lot to gain — or lose — in the debate over immigration. In fact, Republicans have recently been changing their tune on immigration reform.

The polling showed that 32% of Latino voters were more likely to vote Republican if the party steps up and fights hard for immigration reform, but 39% of the same voters would turn against the GOP if  Republican House members vote to defeat reform this year.