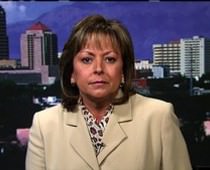 Gov. Susana Martinez has promised to make good on her threat to repeal the common-sense driver’s license law that allows undocumented immigrants in New Mexico obtain a driver’s license with valid ID.

This would only lead to unlicensed and uninsured drivers on New Mexico roads. Insurance rates would go up for New Mexico drivers and police would have fewer resources to identify and locate victims, suspects and witnesses of crime.

Despite her own family’s history, Gov. Susana Martinez is pursuing an anti-immigrant agenda in New Mexico that defies common sense and threatens the safety and pocket book of every New Mexico resident.

From KOAT Channel 7 in Albuquerque:

Martinez said she has something in common with the protesters because her own ancestors came to the country illegally, but it will not affect her position.

“I know my great grandparents on my mother’s side came from Mexico, (but) my stance doesn’t change,” she said.

Tell the governor to STOP going after immigrants to score political points.