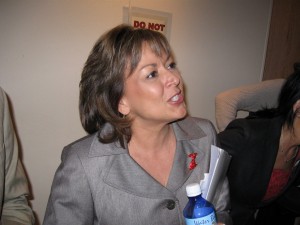 New Mexico Gov. Susana Martinez is out to make a name for herself on the national stage.

Last week, the governor started a statewide lottery of foreign nationals living in the state who must report to a newly opened Albuqurque field office for a residency and identity verification.

Under the guise of security, Gov. Martinez is targeting certain New Mexicans for additional verification and threatening them with cancellation of their licenses if they don’t make the hours-long drive to Albuquerque.

New Mexico is one of three states that grants driver’s licenses to people regardless of immigration status. Gov. Martinez failed to repeal the law last year and has threatened to try again this fall during a special legislative session.

The problems with her proposal are numerous. First of all, they are discriminatory, unconstitutional and probably illegal. Second, they impose an undue hardship on working families in south New Mexico who will have to make a 10 hour round trip to prove â€” again â€” that they live in the state.

Taking away driver’s licenses will have economic consequences too. If breadwinners lose their licenses, families will suffer. If immigrants are unable to get driver’s licenses, the insurance rates for every New Mexican will go up.

Gov. Martinez tells us that her scheme will limit fraud. What she doesn’t tell us is that she fought against fingerprinting proposals and other efforts to eliminate fraud in driver’s licenses last session. Her true aim is to drive immigrants underground by erasing the common-sense New Mexico law from the books.

The governor told a reporter last week that her program was necessary because “…That person, whether theyâ€™re here to work and do good things or if theyâ€™re here to cause harm, we donâ€™t know the difference,â€ she said.

Does she really think the solution is to treat all immigrants, legal permanent residents included, as criminals?

It doesn’t even stop there.

…Her crackdown may be filled with pitfalls.

For one, New Mexico simply does not have a “foreign national” database, said Elsa Lopez of the immigration organization Somos Un Pueblo Unido.

That is because between 2003 and 2008, American citizens could obtain New Mexico driver’s licenses with identification other than a Social Security number.

This means many drivers in the state’s “foreign” database could be as American as the governor. For instance, state Rep. Brian Egolf, D-Santa Fe, told a legislative committee last winter that he might be listed in the foreign database because he used alternative identification when getting his license.

Lopez said another problem with the license sweep could be its legality. She said the people who received licenses complied with all state rules and laws, paid their fees and have done nothing wrong as motorists. But now the governor is picking out some for additional verification and commanding them to go to an MVD office in Albuquerque to keep their licenses.

Attorneys affiliated with Lopez’s group are studying the governor’s order to see whether it can be challenged, she said.

There’s more. The governor either didn’t think the proposal through to it’s logical conclusion for southern New Mexico residents or she meant to set a booby trap by requiring undocumented workers to cross the Border Patrol checkpoint on the way to Albuquerque.

He said people in Las Cruces who are in the country illegally cannot comply with Martinez’s order. For them, the 250-mile trip to Albuquerque could be a road to deportation.

People in Las Cruces have begun receiving letters instructing them to make appointments for personal appearances in Albuquerque, Escobedo said.

Darnell said that changes in the verification system for residents of Southern New Mexico were possible, but that the administration would do nothing immediately.

While the governor plays the waiting game, her ill-conceived policy is impacting the lives of workers and families in New Mexico.

There are other issues, too. Lawmakers in New Mexico feel the governor’s efforts will impact families, public safety and insurance rates of all New Mexicans.

Most Democrats in the Legislature have fought Martinez on her attempts to repeal the licensing law, mostly on grounds of humanity.

Sen. Tim Jennings, D-Roswell, said households can be a mix of legal and undocumented residents.

Taking away a driver’s license may mean the breadwinner cannot get to work, he said. Jennings said the New Mexico law was enacted because the federal immigration system is broken.

Public safety is another reason for the licensing law, said state Rep. Antonio Lujan, D-Las Cruces. He said undocumented immigrants with licenses are more likely to buy auto insurance, thereby making the roads safer for everyone.

Jennings, a legislator since the 1970s, said he was frustrated by Martinez’s unwillingness to compromise.

Democrats in the Senate tried in wintertime to limit foreign national driver’s licenses to two years and to mandate that applicants be fingerprinted. Jennings said this would have eliminated fraud, but Martinez fought the measure. She wanted nothing short of a repeal of the law.

“If this issue truly is about public safety, then why didn’t she support a proposal that actually would have taken steps to prevent and punish fraud and protect public safety?” Jennings asked.

If you have received one of the governor’s letters and believe you have a hardship that makes it impossible to travel to the Albuquerque office, please call: 1-855-784-8407.