An El Paso-based immigrant rights group could see its hopes for a municipal ID card dashed after leaders there determined that issuing the card might prompt immigration hardliners to label the town a “sanctuary city.”

In 2014, the El Paso-based Border Network for Human Rights launched a petition drive asking the city council to consider creating a standardized ID card available to city residents. The card would not reflect a person’s legal status in the country but could be used as proof of residency by undocumented immigrants waiting to apply for President Obama’s executive action on immigration, which is stalled in the courts.

The ID could also be used to open bank accounts, protect day laborers and other workers paid day-to-day from predatory check-cashing agencies that charge high fees and be used to access city services like libraries and emergency care, proponents argue.

Oakland and San Francisco issue similar cards, and the petition to launch them in El Paso garnered more than 10,000 signatures.

But an analysis of the program released by the city reflected leaders’ concerns over what, if any, reprisals could come from state and federal leaders who oppose sanctuary cities, the common term for municipal governments that don’t enforce federal immigration laws.

“In the past year, there has been legislation filed at both the state and federal level regarding ‘sanctuary cities.’ These bills seek to prohibit local government entities from having policies, ordinances, and rules that prohibit or interfere with the enforcement of immigration laws,” the city’s report states.

The city council acknowledges that so far, a municipal ID isn’t considered a criterion that defines a sanctuary city. But that could change next year, the city officials said.

“It is likely, however, that during the interim and upcoming state legislative session, the impact of municipal ID on immigration policies will be discussed, particularly in the Texas Senate. In addition, any current “sanctuary city” legislation could be amended or proposed legislation could be re-drafted to include Municipal ID as a prohibited policy, ordinance or rule,” the report says.

The idea’s backers accused the city of bowing to political pressure.

“The language and reasoning in their report not only contains ambiguous, hypothetical, and artificial arguments to undermine the community demand, but in so doing is guided by reaction to anti-immigrant elements as the City of El Paso panders to fears of ‘sanctuary cities’” Gabriela Castaneda, a BNHR spokeswoman and director, said in a statement. “The report prepared by city staff needlessly takes a political stand against immigrants and marginalizes the positive impacts on civic integration, safety, and community.”

A city spokesperson declined to comment until a final decision has been made.

Castaneda said the group will continue pushing for the program when the council meets next month. But according to the city’s study, the card would have limited benefits if the program is implemented.

In a letter to Verónica Soto, the city’s director of Community and Human Development, Texas Department of Public Safety General Counsel D. Phillip Adkins said DPS wouldn’t consider a municipal ID card a primary document needed to obtain a state-issued driver’s license. It could be considered a secondary document, which can be used in conjunction with another form of identification. But that depends on the final product, Adkins said.

But the proposed city ID would work to obtain some services that other documents, including the Mexican consular ID, are also used for, according to the city analysis. Those include some utility services and school registration in the Socorro Independent School District. 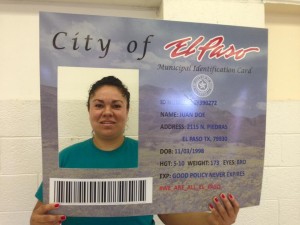