Lawsuit: Teacher Forced Middle Schooler To Pick Up Trash For Wearing Mexico Soccer Jersey, Asked Her “What Are You Doing In My Country?” 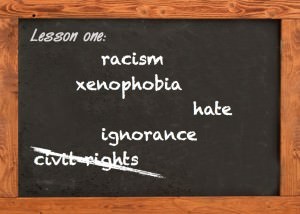 LOS ANGELES, CA â€“ When Diana Aviles received her crying daughter’s phone call last year, she couldn’t believe what she heard â€” her daughter had just suffered public harassment and racial discrimination by a teacher at Big Bear Middle School. Following the incident, school administrators allowed the student to spend the class period picking up trash outside with the custodian, rather than learning inside with her classmates. Despite repeated efforts by Mrs. Aviles to work with the school, the Bear Valley Unified School District, the district’s Board of Trustees and other named defendants have refused to address the violation of federal and state civil rights laws suffered by the then middle-school student.

Yesterday, on behalf of the student minor, MALDEF filed suit in the U.S. District Court of the Central District of California, charging that defendants have violated the Civil Rights Act of 1964, 42 U.S.C. Â§ 1983, and the Equal Protection Clause of the Fourteenth Amendment.

Announcing the lawsuit at a press conference held today at MALDEF National Headquarters, MALDEF President and General Counsel Thomas A. Saenz stated, “Our current national environment seems to condone increasingly open and undeserved hostility toward Latino immigrants. We must draw the line at the schoolhouse door; every child deserves the opportunity to learn, free of discriminatory practices and statements from those running the schools. The district’s inaction was wholly inadequate in response to a teacher’s verbal assault on a child. This lawsuit serves as a warning to any teacher with similar views to keep those views out of the classroom and to serve all children — as the vast, vast majority of educators do on a daily basis.”

MALDEF’s lawsuit addresses the right of all students to an education free of unjustified and unlawful discrimination on the basis of race, national origin and actual or perceived immigration status. With this lawsuit, MALDEF seeks to demonstrate to this school district, as well as other districts, schools, and educators, that permitting a hostile educational environment violates the basic right to an education.

The young plaintiff provided the following statement: “Last year, during the World Cup I wore a â€˜Mexicoâ€™ soccer jersey to school. I walked into my performing arts class, and my teacher asked me in front of the class if I was Mexican. I responded ‘yes.’ She then asked me in a loud voice: what was I doing in her country? She said that it was because of people like me that she had to pay high taxes and high insurance rates. I tried to speak with the principal about it. When I returned, the teacher asked me to leave the classroom because I was crying so much. I never expected to be treated so badly because of who I am.”

The plaintiff’s mother, Diana Aviles, added, “My daughter did nothing to deserve the discriminatory harassment by her teacher. I taught my daughter to acknowledge and to be proud of her family’s heritage because that is the American way for all people. When I learned that she spent her class period picking up trash when she was supposed to get an education, I was outraged. I have asked for answers from my daughterâ€™s principal, teacher, school administrators and the school board, but they have completely ignored me. My daughter continues to suffer. I decided to file this lawsuit in the hope that no other child or parent will have to endure this.”

Nancy Ramirez, MALDEF Western Regional Counsel and lead attorney on this case, stated that “The school district’s failure to respond in a meaningful way to address race discrimination in its school is an abdication of its responsibility. The district unlawfully discriminated against a young student and deprived her of the benefit of a public education by violating her Fourteenth Amendment constitutional rights and her federal and state civil rights. The District has a duty to provide an educational environment free from racial discrimination, harassment and intimidation, and when it fails to do so, the courts will hold it accountable.”

To access a copy of the complaint, visit MALDEF online.