Lawmaker Arrested At White House During Rally Against Obama Deportations

On Tuesday immigration reform advocates rally in front of the White House against all the deportations since President Barack Obama was elected. As the White House frequently brags, President Obama has now deported more people than any other president in history. While frequently blaming the lack of immigration progress on Congress, participants have identified a core set of policies that the President himself could implement to alleviate the suffering experienced in Latino and immigrant communities.Â  Those demands include a stay on the deportations of DREAM students and parents of US citizen children and lifting of the ten-year reentry bar for parents, the termination of local law enforcement immigration programs such as Secure Communities, and the cancellation of administration policies that risk worksite organizing and worker rights such as E-Verify.

At Tuesdayâ€™s action, immigrants directly impacted by the failings of the immigration system have spoken out, including Florinda Faviola (Desemillian) Lorenzo.Â  Ms. Lorenzo, a mother of three, is facing an August 3 forced departure date after being snared in the infamous Prince Georgeâ€™s Secure Communities program where she was arrested for the â€œcrimeâ€ of selling telephone cards. Prince Georgeâ€™s County has the second worst rate of deportation of non-criminals through Secure Communities in the country.Â  To date, requests for relief in her case have been denied by the Department of Homeland Security.

â€œFlorindaâ€™s case is the perfect example of the failings of the administration,â€ said Gustavo Torres, Executive Director of CASA de Maryland.Â  â€œA mother of three is facing forced separation from her children in a case where the Presidentâ€™s agency has specifically refused to provide relief.Â  This is not inaction that can be blamed on Congress; the only responsible party is the President.â€

Friends at the rally were keeping us posted through Twitter: 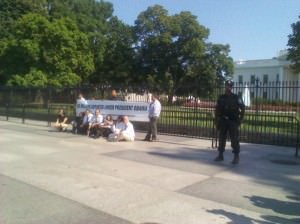 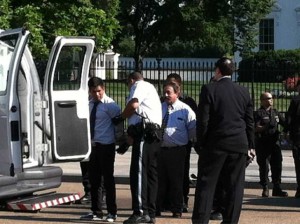