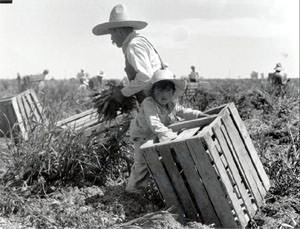 The media has covered the fact that Gov. Susana Martinez’s family came to the U.S. from Mexico (gasp!) illegally at least a month ago. We have covered the issue here as well.

But it looks like Martinez finally went on the record.

The governor has tried to dance around the truth about her grandparents so she can maintain her anti-immigrant agenda in the state.

But the words of her spokesman, Scott Darnell,Â  betray something ugly lurking in the Martinez administration.

“The governor has no reason to question that 1930 Census record about her grandfather and has always known, and publicly spoken of the fact for years, that her family roots trace back to Mexico,” Darnell said.

“It’s unfortunate that some are choosing to personally attack the governor, but these tactics prove that supporters of giving driver’s licenses to illegal immigrants have run out of legitimate defenses for a bad policy.”

We can assume that Darnell is talking about comments made by Allen Sanchez, the executive director of the New Mexico Conference of Catholic Bishops. The bishops oppose the governor’s attempt to take driver’s licenses away from hard-working families living in New Mexico.

At the BNHR press conference and day of action Tuesday morning, Sanchez told the crowd at the Capitol to imagine a young Mexican couple â€œwading the waters of the Rio Grande with hopes and dreams of a better life. â€¦

â€œAnd little did they know that they would have a granddaughter that would be the governor of the state of New Mexico,â€ Sanchez said.

Both times, Sanchez went on to say that Martinez’s story is a beautiful example of the power of the American Dream, and that it would have been wrong to fear Martinez’s grandparents just as it is wrong to fear those coming to the U.S. today.

Being an undocumented immigrant is nothing to be ashamed of. And it is not a personal attack to call someone or someone’s family undocumented. It’s not even a crime to be undocumented. To assert that immigrant and human rights advocates would bring up the governor’s family history as an attack betrays what is in the minds of the governor and her administration.

If you think that calling someone an undocumented immigrant is a personal attack, maybe it’s time to admit that you are an anti-immigrant.