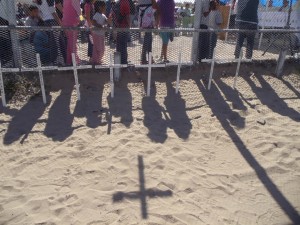 Where: The Border Fence at the intersection of S San Marcial St and The Cesar Chavez Border Highway.

Note: Parking is available at the intersection of Delta and Cypress.

This Monday, December 10 will mark the 64th annual International Human Rights Day. Celebrations and demonstrations are scheduled across the U.S. and around the world.

On the border, the violation of human rights is all too common. These violations come in the form of walls, deportations, violence and disregard for Constitutional rights.

As we watch the immigration reform debate come back into the spotlight, we see how the demand for more enforcement at the border and the interior is being treated as a trade off for the legalization of immigrants living and working in the U.S.

However, it is clear on the border that enough has been done. On one hand, every extremist demand of the immigration restrictionists has been met (including a wall, drones, military on the ground and more), yet there has not been any progress on humane immigration reform.

“We are glad to see movement on immigration reform,” said Fernando Garcia, BNHR Executive Director. “But enough is enough. We have to have reform immigration in this country, but not at the expense of more and more enforcement against immigrant families.”

The outdated and broken U.S. system leaves the vast majority of immigrants without legal means to enter. This pushes them into the deserts and into the hands of criminal smugglers. By most estimates, more than 500 people die every year in the desert trying to cross into the U.S.

As this systemic violence claims lives, border residents also live with near-daily reports of excessive forced used by law enforcement on migrants, workers and people living on the border.

The Border Network calls on President Obama and Congress to stop imposing these conditions on our communities in the name of “border security,” and instead turn their attention to the legalization of undocumented immigrants and then to figuring out how to make existing enforcement smart and accountable.