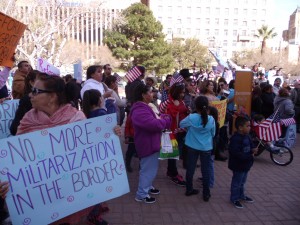 March for Immigration Reform!
When: Wednesday, April 10. March starts at 12 p.m.
Where: Marchers will meet at Armijo Park at the corner of 7th St. and Campbell at 11:30 a.m. The march to San Jacinto Plaza in Downtown El Paso for a rally for immigration reform.

(EL PASO, Texas) – This Wednesday, April 10 is a national day of action for immigration reform and border residents will be joining with a march and rally in El Paso.

“We are asking for an opportunity for our communities to become fully integrated with a pathway to citizenship,” said Gabriela Castaneda, who works with BNHR in the Montana Vista area. “But we don’t want citizenship at any cost. People living on the border have been impacted by bad policies for long enough.”

BNHR is calling for a shift in how we approach the border and therefore demanding accountability and oversight measures for the vast and costly border enforcement system.

In addition to El Paso residents, the march will include hundreds from Southern New Mexico. There dozens of events planned across the country for April 10 and a mega march in D.C.