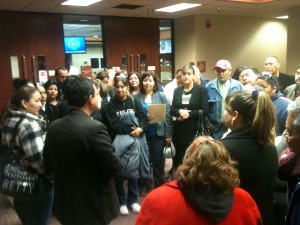 Fernando Garcia speaks to BNHR members outside El Paso County Commissioners’ Court after the passage of the resolution for immigration reform.

Today the El Paso County Commissioner’s Court passed this resolution in support of immigration reform and stopping the punitive and unaccountable enforcement against immigrant and border residents that has plagued our communities.

The Border Network for Human Rights supports this resolution and about 30 BNHR members sat in Commissioners Court this morning to show the border community’s support for reform.

The resolution states in part that “our [border] community understands that the border joins our community economically and socially.” The resolution also points out how, “‘Enforcement first’ has resulted in civil rights violations and choked economic development on the border”

“We have had significant investment in enforcement,” said County Judge Veronica Escobar. “It’s time to shift investment to ports of entry and a path to citizenship.”

Judge Escobar also said that she will be reaching out to other counties along the border to urge them to pass similar resolutions.

The resolution passed with Commissioner Daniel Haggerty being the only one voting “no.”