Washington (CNN) — Tens of thousands of people turned out on Washington’s National Mall on Sunday to support the Obama administration in its next big battle, a renewed effort to overhaul U.S. immigration laws.

Speaking by video to the crowd, President Obama said he would do “everything in my power” to get a bipartisan deal within the year.

“You know as well as I do that this won’t be easy, and it won’t happen overnight,” Obama said. “But if we work together across ethnic, state and party lines, we can build a future worthy of our history as a nation of immigrants and a nation of laws.”

Obama’s appearance was followed by comments from Gustavo Torres, executive director of the Baltimore-based immigrant advocacy group CASA de Maryland. Torres told the crowd, “Mr. President, we are going to hold you accountable.” 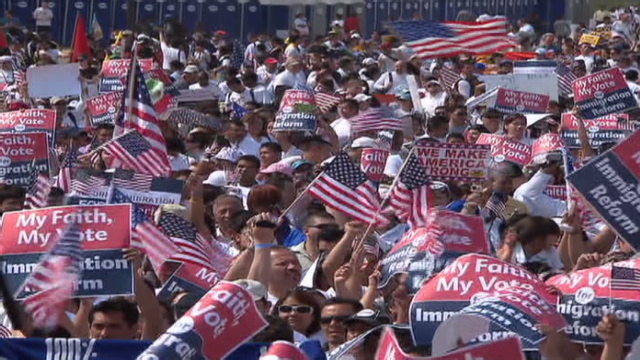 Though overshadowed by the historic debate on health care taking place in the nearby halls of Congress, Sunday’s rally set the stage for a revival of efforts to reshape U.S. immigration law. The issue has been largely sidelined since a similar push by the Bush administration failed in 2007.

“You are a spectacular sight,” Ali Noorani, chairman of the coalition that organized the demonstration, told the crowd. Noorani said the rally had drawn more than 150,000 people “from across the country, and we are demanding comprehensive immigration reform now.”

Noorani’s figure could not be verified immediately. The crowd packed more than two blocks of the Mall between the Capitol and the Washington Monument.

Then-President George W. Bush supported a bipartisan effort to overhaul U.S. immigration laws four years ago, proposing to set up a path to legal status for the estimated 11 million people in the United States without authorization. But those measures were criticized as establishing amnesty for illegal immigrants, and legislation Bush supported died with a Senate filibuster — one led by members of his own party but joined by more than a dozen Democrats.

Obama called the senators’ plans promising and said it should be the basis for moving forward. He called on Congress to act on that plan at the earliest possible opportunity.

Obama’s push on immigration also helped secure a key vote for his health care bill. Rep. Luis Gutierrez, D-Illinois, announced his support for the bill after receiving a commitment to move forward on immigration “as soon as possible.”

“The wait is over. The time is now,” Gutierrez told Sunday’s rally. “We’re ready to turn our hope into victory.”