Caravan for Peace and Justice in El Paso

The Caravan for Peace and Justice led by poet and peace activist Javier Sicilia, will be stopping in El Paso Monday night, August 20. The Border Network for Human Rights has organized a bienvenida for the Caravaners at San Jacinto Plaza. The event will last from 8 p.m. to 10 p.m., depending on what time the Caravan arrives from it’s previous stop in Santa Fe, New Mexico.

More than 60,000 people have been killed in drug violence in Mexico in the last few years. 10,000  people have been disappeared and over 160,000 displaced. Global Exchange and Mexico’s Movement for Peace with Justice and Dignity (MPJD) led by Javier Sicilia have made “End the Drug  War- No More Violence” campaign a priority in 2012. Starting in August, a high profile caravan will cross the US starting in San Diego/Los Angeles, heading east along the US-Mexico border and then up to Chicago, New York and DC.

Sicilia’s son, Juan Francisco was murdered along with six friends on a fateful night in March of  2011. He has since become an inspirational voice for peace, justice and reform– drawing huge  crowds throughout Mexico. He comes north this summer with a call for change in the bi-national  policies that have inflamed a six-year Drug War, super-empowered organized crime, corrupted  Mexico’s vulnerable democracy, claimed lives and devastated human rights on both sides of the border. 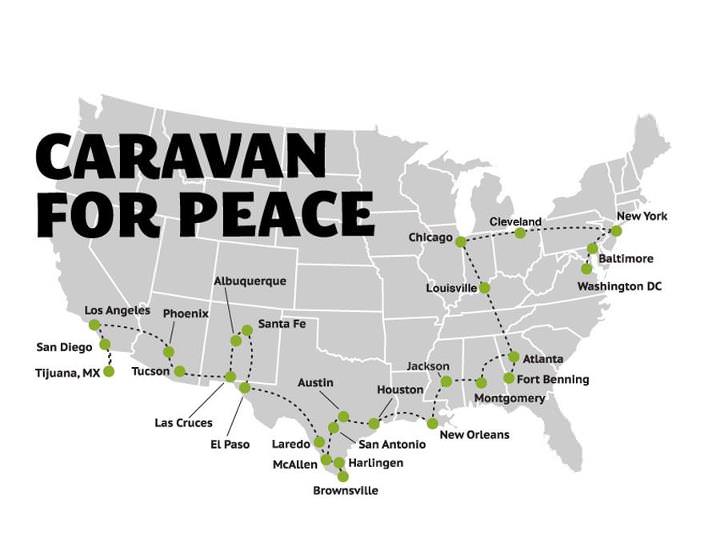 This summer, victims of the drug war in Mexico will travel across the United States. "We will promote peace with justice and dignity on both sides of the border," said organizers on the group's website.

2012 offers a uniquely fertile moment to internationalize the struggle for peace in Mexico. Latin American elite opinion is shifting rapidly on the question of ending drug prohibition. This call for reform has not yet echoed in the United States. The Caravan represents an unprecedented effort by Mexican civil society to impact U.S. thinking and policy.

A Cross-Border Caravan for Peace

The Movement for Peace and Justice with Dignity (MPJD), Sicilia’s organization, has prioritized a U.S. Caravan, requesting Global Exchange –a long trusted U.S. partner– to organize the advance work, as well as lead the logistics of the Caravan.

The Caravan represents one element of a broad strategy responding to Mexico’s violent national emergency resulting from Drug War policies (in Mexico and the U.S.) gone tragically wrong. The idea of the Caravan is to make Mexico’s national emergency tangible in the United States and to create a platform where those affected by the Drug War from Mexico, the U.S. and elsewhere can join their voices to inform public opinion on both sides of the border.

The U.S. Caravan’s mission is:

The Caravan takes place at a politically charged moment. It begins in San Diego, six weeks after Mexico’s July 1 presidential election and arrives in Washington, D.C. in September, six weeks prior to the U.S. elections. This summer we will bring communities together around events large and small, turning awareness into action and building a movement that will continue pushing for changes at the local, state, national and international level long after the Caravan has passed through.