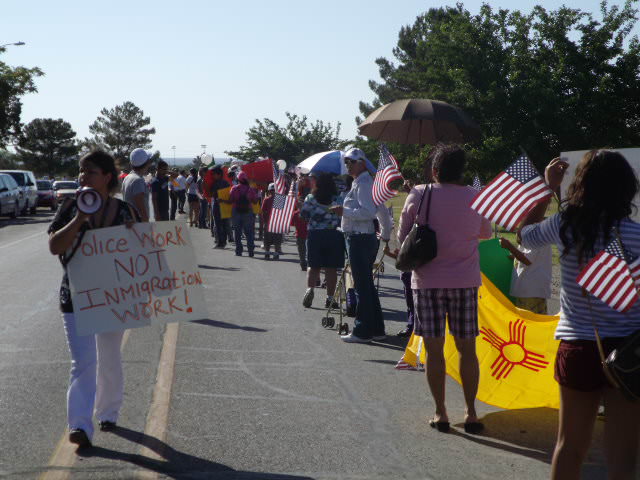 Members of BNHR in Southern New Mexico march on May 16, 2012, in the small border town of Anthony, NM. Three hundred people came to the march and signed a petition in support of a resolution to keep Anthony police from acting as immigration agents.

UPDATE: The City Council approved the community safety resolution with a vote of 4-1!!

CLICK HERE to Watch the Anthony City Council discuss the resolution supported by BNHR members in Southern New Mexico on Wednesday, October 17 at about 6:30 p.m. MST.

(ANTHONY, New Mexico) – There’s a problem in Southern New Mexico. For years, members of the community here have been reporting that local police have been unconstitutionally acting as immigration agents. This pattern has been documented for the last several years by the Border Network for Human Rights.

To counter this disturbing trend, members of the BNHR have been working for months to urge the Anthony, New Mexico city council to make the community a model for common sense police policy in Southern New Mexico.

Border Network members are asking the city council to consider public safety and family values by adopting a resolution that would make clear that police in Anthony are to put community safety and community trust ahead of the “papers, please” model of policing.

“All we want is tranquility, trust and confidence toward our police,” said Teresa Nevarez, director of the Southern New Mexico Human Rights Center in Anthony. “We want our community to be able to drive to get their groceries without the fear that they won’t come home because the police call ICE.”

The previous meeting of city council was cut short due to overcrowding of the city council chambers. The reason for the overcrowding was the outpouring of community support for the community safety resolution that will make it Anthony’s policy that local police do not act as immigration agents.

Members of the Border Network will again come to Anthony City Hall to support the resolution and testify in favor of it. Accommodations will be made to handle the crowd. In addition, the Border Network will be broadcasting the proceedings live online at the BNHR Ustream channel. The livestream will begin when the Anthony City Council begins discussions of the community safety resolution. The City Council meeting begins at 6 p.m. Mountain Time.

The most recent report by the Border Network called “The State of Human Rights on the Border” shows that there are more instances of local police and sheriff’s deputies acting as immigration agents in Southern New Mexico and Dona Ana County than in neighboring El Paso county.

The philosophy of “community policing” that includes the belief that local police must not engage in immigration checks is one that is favored by local law enforcement executives and their departments all over the county, including the Major Cities Chiefs Association.