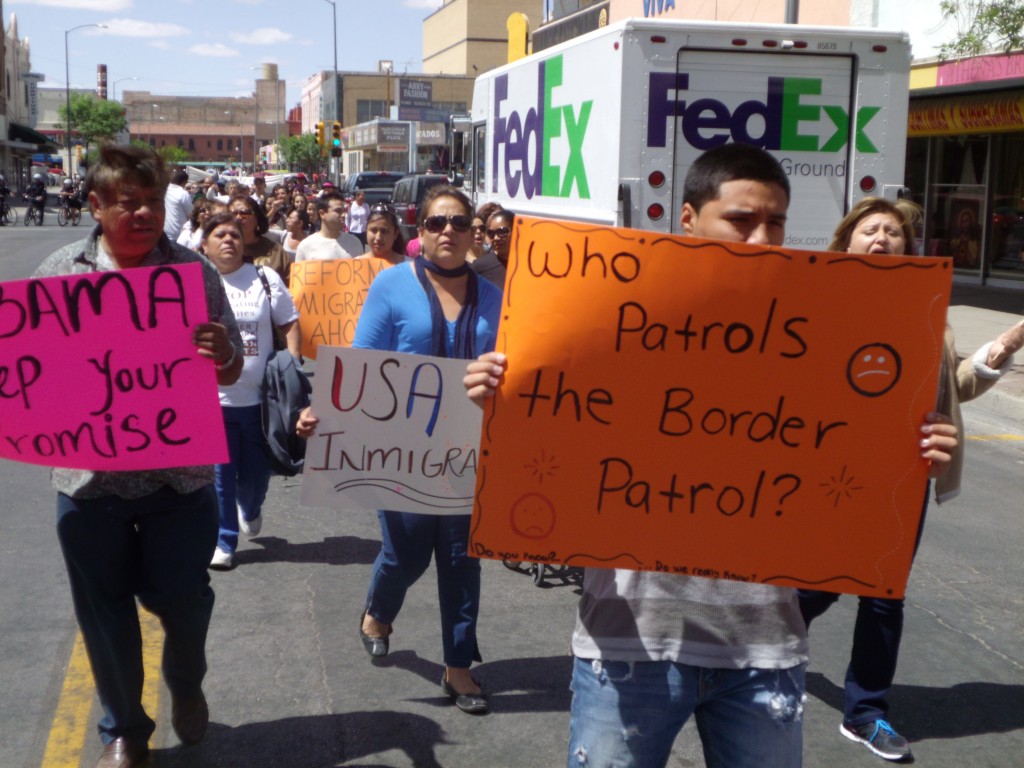 March for immigration reform and accountability in border enforcement in El Paso on April 10, 2013.

In particular, BNHR applauds the inclusion of language to create DHS Border Oversight Task Force in the proposed legislation. This is an accountability mechanism that BNHR has believed in for many years.

The Task Force is about bringing border communities — that means local law enforcement, academics, elected officials, faith leaders, border residents and others  — to the table when we talk about border enforcement. This creates better strategies for keeping all Americans safe, and we have the evidence of it.

This model of community policing has already proven to work. In El Paso, Texas, the safest U.S. city for it’s size, border residents regularly sit down with federal and local law enforcement agencies to discuss the concerns of residents and the authority of agencies like Border Patrol. This model of dialogue and community policing shows us that it is no accident that El Paso is consistently rated most safe.

You can read the entire 844-page bill here.

Past immigration debates have ended with little reform to the system, but instead have yielded a massive expansion of unaccountable and irresponsible enforcement against border and immigrant communities.

And because the immigration debate always seems to hinge on the border, there are provisions included in the bill that directly impact those who live and work on the border. While there are misguided ideas about the border in the senators’ proposal, we may still be looking at a breakthrough on bringing accountability to the border.

“This is a historic moment,” said BNHR Executive Director, Fernando Garcia. “We all know that we need immigration reform, however, we need to make sure we are doing it the right way. We must ensure that our border enforcement strategy is accountable and transparent.”

Other provisions that will improve border policies include strengthening prohibitions on the use of lethal force by border agents, prohibitions against racial profiling, training on oversight provisions for border agents, an DHS ombudsman on human rights and the creation of DHS border community liaisons in every Border Patrol Sector. El Paso is currently the only Border Patrol sector to have a border community liaison, thanks to years of work by BNHR in engaging in dialogue with the El Paso Border Patrol sector.

However, we cannot ignore provisions in the bill that would further entrench the problem of unaccountable enforcement at the border. Sending the National Guard to the border deepens the problem of militarization in border communities. Plans to spend an additional $3 billion — on top of the $11 billion spend on border enforcement in 2012 — are misguided and an irresponsible use of resources. Additionally, the senators’ plan to give DHS a new metric — 90% apprehension rate at the border — will also lead to further expansion of the massive militarization of the border.

At the border, we need an enforcement system that works and focuses on real threats – terrorists, drug smugglers and human traffickers – not people looking to work and raise a family in the U.S.  This isn’t just what we think. According to recent polling commissioned by the Campaign for Accountable, Moral and Balanced Immigration Overhaul (CAMBIO) of which BNHR is a member, a vast majority of Americans — 84% — believe that we should make stopping drug and weapon trafficking along the border a higher priority for border patrol than stopping illegal immigrants. The American people are right.

The bill is a step in the right direction but leaves much room for improvement, especially on border issues.