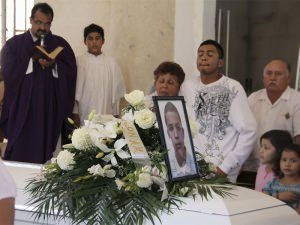 (EL PASO, Texas) – The shooting death of Jose Antonio Elena Rodriguez, 16, at the hands of Border Patrol on October 10 at the border at Nogales, Arizona, is just the latest in a disturbing trend of agents using lethal force against migrants. The Border Network condemns this killing and the dozen that came before it.

One again, Border Patrol spokespeople claim that alleged rock throwing justified the use of lethal force. Recently this argument has become quite a pretext for Border Patrol agents to shoot to kill. There has still not been a clear an transparent response by Customs and Border Protection (CBP) on the protocols on when and how the use of lethal force at the border is allowed.

The boy’s family is pursuing a lawsuit over the incident. The Border Network hopes that the lawsuit will bring about a full and transparent investigation and that justice will be served. However, the dangerous precedent set by a judge here in the case of the shooting death of Sergio Adrian Hernandez Guereca makes that seem unlikely. The judge here ruled against Sergio’s family using the reasoning that the U.S. has no jurisdiction over a death in Mexico even if the bullet is shot from the U.S.

“What we are facing with these incidents is a consequence of a failed strategy,” said Fernando Garcia, Executive Director of the Border Network. “We have been insisting that the consequences of massive border enforcement and militarization, specifically in the lack of accountability and oversight, have led us to a disastrous human and civil rights situation at the U.S.-Mexico border.”

The Border Network as well as other organizations along the U.S.-Mexico border are concerned that the systemic lack of transparency will lead again to there being no justice for those responsible for killing of Jose Antonio.

The Border Network renews it’s call on President Barack Obama and to Congress to create an independent oversight and review commission to address the lack of transparent investigations of institutional violence at the border and the overall border enforcement strategy and its impact on border communities and immigrant families.

In the past, we have demanded that President Obama use his executive authority to create a Border Enforcement Accountability and Oversight Commission that can assess, monitor and investigate all federal border and immigration policies, projects, programs, and activities, including those of DHS — Customs and Border Protection (CBP), Immigration and Customs Enforcement (ICE), and Citizenship and Immigration Services (USCIS) — and those of all other relevant agencies.

So far, there has been silence from the administration.

How can we have the largest domestic enforcement strategies operating at our border with more than 22,000 personnel, a militarized infrastructure, with one of the largest domestic budgets and not have any checks and balances in place to prevent human and civil rights abuses? This situation we live in at the border does not reflect our American values.