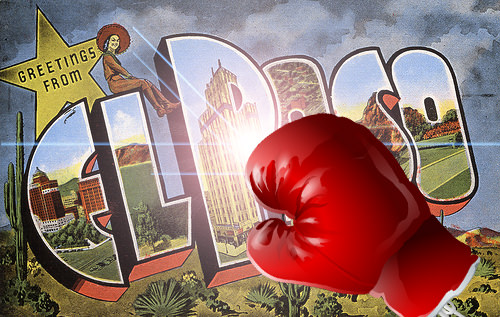 
The decision by UT Chancellor Dr. Francisco Cigarroa to cancel the boxing match between Julio Cesar Chavez Jr.  and Andy Lee is based on unfounded perceptions of the border and the people who live here.

Despite these facts, Chancellor Cigarroa chose to cancel the much-anticipated match over unspecified “safety and security concerns.”

“We reject the depiction of our city as unsafe,” said BNHR Executive Director Fernando Garcia. “You cannot ignore the political element here, when our own governor lies about our city and says there are car bombs going off in downtown El Paso, it is unfair to the communities that have made this the safest city in the nation.”

The announcement that the match had been canceled came the same morning that President Bill Clinton was in town to campaign for Rep. Silvestre Reyes and just days after a Saturday boxing match at the Don Haskins Center.

“You look at that and you can see why El Pasoans feel insulted,” Garcia added. “And the worst part is that it’s not just an insult, it’s an insult based on lies about our city.”

BNHR is calling on the Chancellor to reverse this decision and to apologize to border communities.