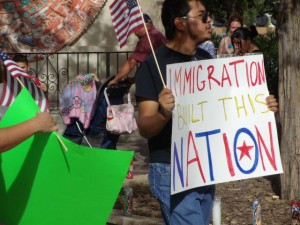 “The Border Network recognizes this as a first and very important step to address the core issue of  immigration reform, which is providing a path to citizenship for 11 million undocumented people living and working in the U.S.,” said Fernando Garcia, Border Network for Human Rights Executive Director. “But we cannot ignore the problems within these principles. We are deeply concerned and disappointed that the Senators would connect the much-needed legalization program to new border enforcement triggers and further militarization of our southern border.”

The bipartisan proposal calls for the deployment more drones (unmanned aerial vehicles), more border patrol agents, more infrastructure and military technology. It also calls for national, mandatory E-Verify, which would be something very close to a national ID.

Our border communities have seen an unprecedented expansion of the efforts to “secure” the border in the last 10 years. We have quadrupled the number of border patrol agents to more than 22,000. Hundreds of miles of fencing and walls have been erected. Military units and National Guard have been deployed in a constant and unregulated basis. And billions of dollars, $18 billion in 2012 alone, have been spent and wasted in programs, operations and technology.

BNHR strongly rejects the notion that more punitive, expensive and unaccountable enforcement is needed to move forward with a functional and humane reform that brings people out of the shadows and unifies families.

BNHR also warns of the dangers of trading off the safety, rights and well-being of the border community for political gains.

In fact, every border security trigger from the failed 2006 immigration reform bill has been met or exceeded. Enough been done to secure the border.

The Senators’ principles do contain some much-needed measures to improve accountability of enforcement systems, however. For example, adding more personnel to the currently understaffed ports of entry, more training for Border Patrol, prohibitions on racial profiling and the use of lethal force, and a mechanism for border communities to provide input and critique of policies that impact their communities.

The principles also include a fast-track for citizenship for DREAMers and an acknowledgement of the serious problem of backlogs. These measures are what an immigration reform deal should be about.

Lawmakers should instead concentrate their efforts on these rational and needed measures to fix immigration and enforcement systems.  A functional immigration system will make our country more free, safe and prosperous. And a balanced approach to immigration enforcement would better reflect our American values of due process, fiscal responsibility and accountability.