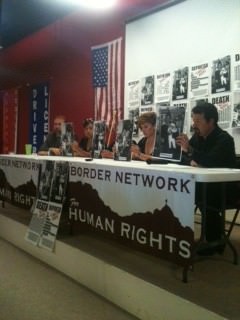 At a Nov. 1 press conference, BNHR highlighted the stories of Ruben Adrian Beltran and Antonio Garcia Varela, two young men who were wrongfully deported to Mexico and killed shortly afterward in Juarez.

(EL PASO, Texas) â€” On Tuesday, BNHR members shared stories of loved ones lost and demanded justice from the U.S. and Mexican governments.

Deportations under Barack Obama have continued at a record-breaking pace. And on the border, a deportation can be a death sentence. This fact ripped through the families of BNHR members Janet Marquez and Catalina Valera, who spoke at the BNHR El Paso office on Tuesday.

Marquez and Valera explained how their families were victimized twice â€” first by the U.S. system and then by the Mexican government. In their cases, the U.S. deported young men across the border, where they were left in the hands of a corrupt, unaccountable government. Both men were murdered in Ciudad Juarez, where their cases have never been investigated by Mexican authorities.

Marquez, a 24-year-old who is eligible for the DREAM Act, said Tuesday that she wants to stay in the U.S. with her two sons, who are 5 and 1. â€œI consider my family to be American,â€ she said. â€œI have dreams and plans for me and my family.â€ Marquez said she now lives in fear that her children will be orphaned if she is deported to Juarez. Her attorney, Carlos Spector said that they will be filing for political asylum based on the apparent complicity of theÂ  Mexican government in the violence that killed her husband. Marquez, who has been a human rights activist for years, fears criminals in the Mexican government will target her for speaking out.

Valera described the circumstances that led to her sonâ€™s deportation. She detailed how ICE swept through her neighborhood, where they searched multiple homes without warrants. She said ICE humiliated, threatened and beat members of her family that fateful day. â€œMy son begged ICE. He said â€˜Please, I have a wife, I have children,â€™ but the agent said â€œI donâ€™t care,â€™â€ Valera said through tears. â€œWe donâ€™t want others to have cases like this.â€

Cristina Parker, BNHR media coordinator, said that the organization is filing a complaint with the Office of the Inspector General of the Department of Homeland Security on the Valera familyâ€™s behalf. â€œWe have already made the call to the OIG,â€ she said. â€œWe believe their case needs to be investigated.â€

Fernando Garica, Executive Director of BNHR, told reporters that the U.S. and Mexico were to blame for the recent increase in deaths of immigrants. â€œIn recent years, migrants and border residents have been subjected to a brutal reality of government actions in the U.S and in Mexico and by intention or omission, these have resulted in institutional abuses, mistreatments and death,â€ Garcia said. â€œThe ill-conceived immigration and enforcement policies in the U.S. have not only separated families, but in a number of cases, have violated basic legal and human rights of individuals arrested or put into deportation proceedings.

â€œAt the same time, we now see a horrifying pattern where the Mexican government has completely failed to protect those migrants deported into its territories due to corruption, criminal relations and lack of responsibility,â€ Garcia continued. â€œFor BNHR, both governments are responsible for the violence and immigrants that have been killed at the border, in Juarez and in the U.S.â€

After marching for nearly four miles, BNHR joined protestors occupying San Jacinto Plaza to rally, break bread and hold vigil in solidarity. Marquez and Valera spoke to the crowd and BNHR coordinators delivered messages of solidarity from their communities to the occupiers.

BNHR members then held vigil and led three teach-ins with occupiers to discuss the impact of deportation, detention and ill-conceived enforcement policies on migrants and border communities. Topics they discussed included how the deaths of thousands of people were connected to the $3 billion border wall and how powerful private prisons and their lobbyists worked to get anti-immigrant legislation passed in Arizona and other states.