BNHR Launches We The Border Campaign, Petition to Obama 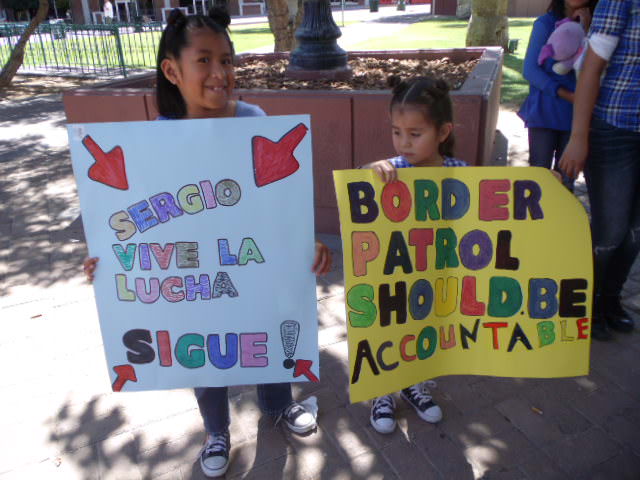 (EL PASO, Texas) — The Border Network for Human Rights on June 7 marked the second anniversary of the killing of 15-year-old Sergio Adrian Hernandez Guereca with a march for justice.

About 250 people marched one mile from Downtown El Paso to the fence separating at U.S.-Mexico border to meet with Sergio’s family. There, Teresa Nevarez, the Director of BNHR’s Southern New Mexico Community Center for Human Rights, was allowed to enter the canal that separates the U.S. and Mexico to talk with the family and deliver a gift of flowers from BNHR members.

The event launched the We The Border Campaign, a national effort aimed at President Obama. Border residents are asking the president to use his executive authority to create the Border Enforcement Accountability and Oversight Commission. The commission would be independent of the government and have the authority to monitor and assess the massive and costly border enforcement strategy. The commission would include voices from local and federal law enforcement, including the Border Patrol, faith leaders who work on the border and community organizations such as BNHR.

A key to launching the campaign on June 7 was the fact that BNHR was able to send a representative, Teresa Nevarez, to ask Sergio’s family to be the first to sign this petition. This would not have been possible without the professionalism of the El Paso Border Patrol Sector. You can read BNHR’s thank you note to Border Patrol here.