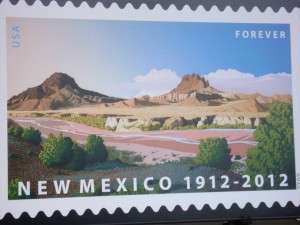 Editor’s Note: The following is a special guest post from Dr.Â Luis I. QuiÃ±ones. Dr. QuiÃ±ones is an educator with more than 26 years of experience in public school education and an advocate of dual language/cultural education. He is also an author and publishes Las Razas Peace & Historical Calendar. He is also a cultural musicologist. To listen to a bilingual song written by Dr. QuiÃ±ones on this issue, click here.
January 17, 2012
Dear Senators and Representatives:
On this, the 100th anniversary of our great State being admitted into the Union, we must fight back attempts that promote hatred, that promote divisiveness, that promote xenophobia, and distrust â€“ plus increase the danger to New Mexico residents. On this, the 100th anniversary of our great State, it is shameful that Governor Susana MartÃ­nez chooses to push her anti-immigrant legislation. You would figure that in 100 years of Statehood, New Mexico would be a land where racial tolerance and acceptance are principles of decorum, where languages and cultures co-exist in harmony, and where diversity of the Stateâ€™s residents is hailed as a cornerstone of our Statehood. Yet, Governor MartÃ­nez has chosen to destroy all of this. Again, she is pursuing anti-immigrant legislation in the form of denying driversâ€™ licenses to undocumented immigrants. This in spite of the fact that we have the best driversâ€™ license legislation for undocumented immigrants in the entire United States. On this 100-year anniversary of Statehood do we wish to join such racist states as Alabama, Georgia, South Carolina, and Arizona?
This is blasphemous against the creed underlined by the recitation to the Stateâ€™s flag as a symbol of â€œperfect friendship among united culturesâ€. It is shameful that Governor MartÃ­nez chooses this disastrous path to destroy the wonderful allegiances, trust, and friendships that have evolved â€“ and are evolving — in 100 years of Statehood.
If she succeeds, then some New Mexico moms and dads will live in fear, they will be racially profiled, their children will be bullied at school, they will not be able to drive to work, they will not be able to drive their children to school, they will be afraid to drive to buy groceries, and they will even be afraid to drive to their place of worship! In essence, this is anti-Christian legislation. Additionally, they will not be able to buy automobile insurance, thereby, creating more danger on New Mexicoâ€™s roadways.
Please honor 100 years of Statehood and evolving racial harmony by rejecting Governor MartÃ­nezâ€™ latest anti-immigrant xenophobia. On this 100-year anniversary of Statehood, please honor New Mexicoâ€™s creed that strives for a â€œperfect friendship among united cultures.â€
Muchas gracias.
Sincerely,
Luis I. QuiÃ±ones, Ph.D., Las Cruces, NM.